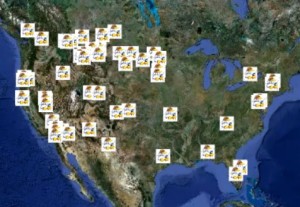 The developer’s Duck logo doesn’t have a cape, but the system it represents is certainly “Super”. It was an FAA approved NexGen AWOS system, but suddenly, in January 2012, the FAA, in a bizarre chain of events, decertified Super AWOS. (You can learn more about this by clicking HERE). Since January, the manufacturer has been engaged in a valiant battle to regain certification and save the company. For now, Super AWOS broadcasts can only be used as an advisory. That means that IFR pilots cannot, at this time, use the altimeter setting to “shoot” an instrument approach. This clever system has been installed at over 80 US airports, and you just might find yourself using it. So, it’s worth the time to learn about it.

Super AWOS lives on the Unicom frequency. AirNav.com calls it “AUTOMATED UNICOM” and instructs pilots to use“3 CLICKS FOR ARPT ADVISORY & WEATHER, 4 CLICKS FOR RADIO CHECK”.  Flight Guide’s reference lists it as:“CTAF: U-122.8 auto – wx”. However, the A/FD doesn’t seem to want to call it anything and ignores any difference in the UNICOM. You’ll just see something like “COMMUNICATIONS: CTAF/UNICOM 122.8”.

Approaching an Airport with Super AWOS

Inbound to an airport, one of your concerns is other aircraft in the area. Because Super AWOS is on the UNICOM frequency, listening for traffic is easy. Let’s suppose that you don’t hear anyone on UNICOM, so you broadcast for airport advisories. If no one responds, Super AWOS senses that and becomes the airport greeter, broadcasting, “Good evening. This is Potomac airfield automated advisory. Wind 230 at 4. Altimeter 29.98. Conditions favor runway 24, right traffic, pilot’s discretion.” Super AWOS added “Pilot’s discretion” to the end of the advisory because, except for you, it has not detected any traffic on UNICOM. If Super AWOS “hears” other aircraft on UNICOM, instead of advising “pilot’s discretion”, it will add, “listen for traffic”.

Super AWOS will also provide “how to” instructions by adding, “For further services, click your mike three times for advisory, or four times for a radio check.”

Three clicks will initiate a broadcast of wind and altimeter. If low visibility or high density altitude are a problem, Super AWOS will add those to the advisory.

If the conditions have changed significantly since your last call, for instance a wind shift, you’ll hear something like, “Updated Potomac advisory. Wind 220 at 21, caution crosswind – wind shear.”Now that’s smart!

Just click the mike three times on UNICOM frequency for the wind and  barometric pressure. If Super AWOS “feels” that visibility or density altitude is a problem, it will add that information, too.

4X for a Radio Check

At a quiet airport, wouldn’t you like to know if your radios are working before you blast off? Four clicks on the microphone and Super AWOS will advise you to make a radio check, then echo your transmission. If the frequency isn’t too busy, it will also evaluate your transmission with a certain value out of a possible score of 10. (“10 of 10” – “1 of 10”). If density altitude is a problem, it will also add “Caution, density altitude” to the radio check.

Super AWOS has Your Back 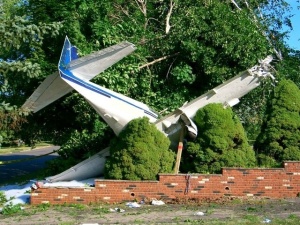 Super AWOS has another special feature. It scans 121.5 and listens for ELTs. If it hears one, it reports its finding to Air Force Rescue.

Super AWOS does not provide ceiling information because:

– Pilots only need to know the visibility before “shooting” an instrument approach.

– Ceiling requirements were excluded from the criterion to initiate an approach in 1967. See FAA letter, bottom of page four.

– The sensors, called Laser Ceilingometers, are terribly expensive to maintain.

– These sensors only look at one tiny point in the sky, and sometimes manage to exaggerate, one way or the other, the true ceiling.

Click on the Super AWOS Duck and choose from 82 airports in the US.

You can opt for a display in Text, Graphic or Mobile

Remarks: Conditions are generally fair. Pressure is stable over last two hours. Temperature is rising to 88 degrees Fahrenheit. Temp/Dew spread is widening. Next Update: 5 minutes before the hour

Using a Smart Phone? Click on the “Mobile” option. 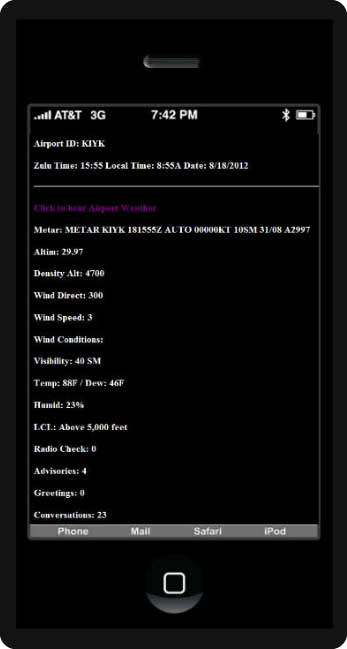 For more information, you can watch a 9 minutes
video about Super AWOS.