Paper charts and books have a definite life cycle. Keeping up with all of them can be arduous and expensive. Yet, it’s a good idea to keep them current because of all the changes. For instance, Sectionals and TAC charts have a life span of six months. When a new TAC is published it includes an average of 100 new changes. A new Sectional averages 278 changes. The Airport Facility Directory (A/FD) is good for 56 days, and when the new one comes out, it has, on average, 825 new changes. Terminal Procedures (approach plates) are also good for 56 days, and have fewer changes – an average of just 75. The king of change is the IFR chart. They change every 56 days and include 1,300 changes.

Do you need to have paper charts in your possession when you fly? Not all pilots are required to  have a chart when they fly. FAR 91.503 says that pilots in command of a large (weighs more than 12,500 pounds), multi-engine aircraft, or an aircraft in a Fractional Ownership Program, must have “pertinent aeronautical charts” available for each flight. (Reference AOPA)

According to the July/August 1997 issue of FAA Aviation News (cleared through the FAA’s Chief Counsel’s office), “. . . it is not FAA policy to initiate enforcement action against a pilot for having an old chart or no chart.” That’s because there is no regulation on the issue. However, in that same issue of FAA Aviation News, it states that “ . . . if an out-of-date chart, no chart, or an out-of-date database contributed to the condition causing an FAA investigation, it could be used in enforcement action.”

Can I legally use my iPad as a replacement for paper charts for VFR or IFR flight? Yes, under FAR Part 91, you can legally use an iPad that has current charts installed for both VFR and IFR flights. AC 91-78, dated 07/20/07, makes it perfectly clear that under PART 91, Electronic Flight Bags (EFBs) / Electronic Chart Displays (ECDs) can be used during all phases of flight operations, [IFR or VFR], in lieu of paper reference material when the information displayed meets the following criteria:

(1) The components or systems on board the aircraft which display precomposed or interactive information are the functional equivalent of the paper reference material.

(2) The interactive or precomposed information being used for navigation or performance planning is current, up-to-date, and valid.

So, apps like ForeFlight, Wing-X and Garmin Pilot, when current, legally take the place of paper charts. However, an FAA inspector recently stated that iPads and their apps are causing more violations than ever before; 10 times more. These same apps that are designed to keep pilots safe, are causing problems. Let’s explore the ways your iPad and app can put you in the FAA’s doghouse.

This isn’t a toy or game app.

If you don’t know how to use your app, it can get you into trouble. Consider the guy who, when flying over Palm Springs, CA, saw two F16s along side of his aircraft. He thought that ForeFlight showed TFRs all the time. However, once he landed, he discovered that “TFRs” was not selected and he had flown smack dab into the middle of a Presidential TFR. He also didn’t realize that without something like Stratus, a TFR can pop up while you’re in flight and you’d never know it.

Do not use ForeFlight, Wing-X or Garmin Pilot, unless you are properly trained! Learn how to use your app with an instructor before you blast off alone.

Charge to 100%.One of Murphy’s Laws says that your iPad will always turn off when you are in between restricted airspaces. You can run low on battery power and not have a charger, or your iPad can overheat and shut down. There are lots of reasons that you should not rely on it. Charge it to 100% before flying and if possible, have paper charts in the plane.

Zoom Out. Take a look at the big picture. For instance, look at this view of Long Beach, CA.

Zooming out will reveal a bigger picture of hidden airspace that you also need to avoid. At a minimum, always display your next two waypoints. 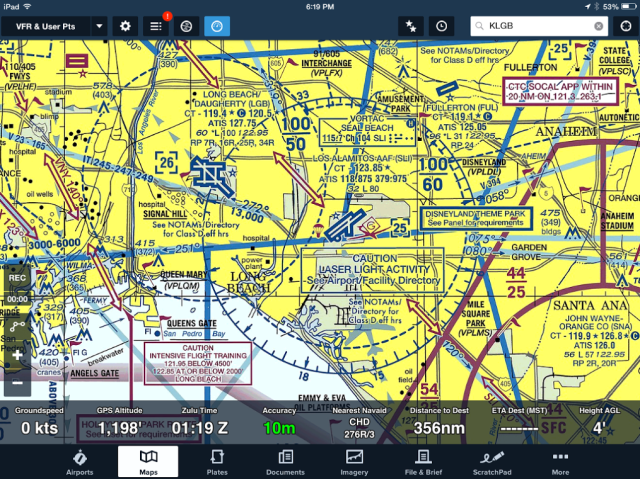 Unless you have a Stratus type ADS-B “In” device, weather does not magically update in flight.

Some pilots think that if they have looked at the app’s weather before takeoff, it will stay that way. Without a Stratus type ADS-B connection, the weather won’t update. In the example to the far right, this is the iPad weather that the pilot looked at before he took off. Notice the slim temp/dew point spread, but it’s still VFR. The left, Low IFR display is the more current KAJO weather, checked by an iPhone. 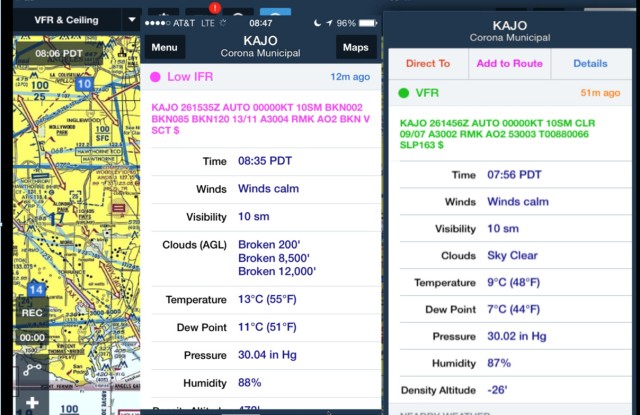 You should know that:

Verify the weather with Flight Watch and look outside.

Don’t rely on the app’s “Hazard Advisor” to keep you safe from higher terrain. Terrain Advisors don’t show the down drafts over a mountain that can put you into a steep descent. Don’t plan to cross a mountain at less than 2,000’ above the highest elevation! 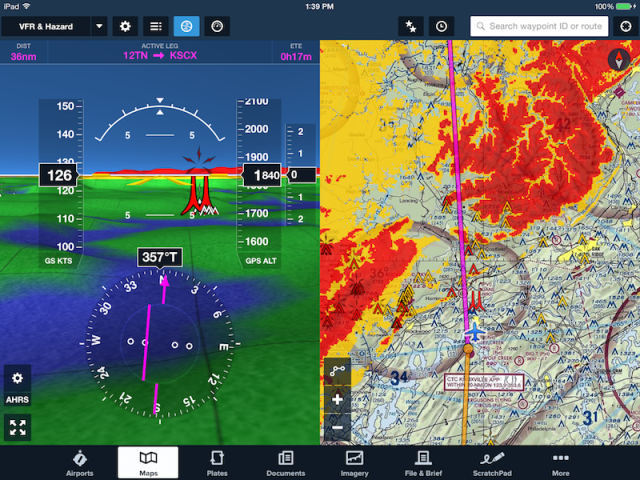 Mountain Flying 101: Barely clearing a ridge can be dangerous because just a few knots of wind  can create down drafts. A wind speed of 1 mph can pull you into a 50 FPM descent. However, as that 1 mph wind crosses the crest, the laws of physics doubles the wind’s speed as it descends the mountain. Therefore, a 1 mph wind and a meek 50 FPM descent becomes a 2 mph wind with a 100 FPM descent or pull. Let’s consider a 15 mph wind, doubling to 30 mph as it descends down the slope. Now you’ve got a downdraft, pulling you down at  1,500 FPM. If you are relying on Hazard Advisor and plan to barely cross the mountain at 100 to 500 feet above the crest, you’re looking for trouble.

Keep your data up to date.

Always update before you fly! If you have an out of date database, georeferencing won’t work, (assuming you paid for georeferencing).

Before you fly, check to see if you have data for the states that you’ll fly over.  Put your iPad in “Airplane Mode” and try to access the charts and procedures that you’ll need. If those maps look blurry, or you see a “Database Out of Date” notice, you need to update.

Don’t trust the green dots. Don’t assume that because the Flight Rule dots are green where you are planning to fly, that you have just received a valid weather briefing. They are a great tool, but they’re just an overview.

Each pilot in command shall, before beginning a flight, become familiar with all available information concerning that flight. This information must include –

Call Lockheed Martin and get a complete standard briefing. You’ll have the satisfaction of knowing that your briefing was recorded. If you have a weather related accident, you don’t want to stand in front of an Administrative Law Judge and explain that you flew into Low IFR because your iPad had a green dot and that was your briefing. ForeFlight, DUATS, etc., will generate a text briefing for you, but you need to read all of it. It won’t bode well for you if you tell the judge that you got a text briefing, but you didn’t read all of it.

Garbage in, garbage out. It doesn’t matter how much experience you have, you can still make a mistake. Here’s a true Story from a NASA report:

An airline pilot received his pre-departure clearance on his iPad. He wrote, “This is a relatively new process for me. The iPad shows the “cleared route” just above the “filed route”. I programmed the “filed route” into the FMS. The only difference was the SID. After departure, NORCAL asked why we missed the turn.” Train before you fly.

Flying too close to TFRs, Restricted, Class A, B, or C airspace is risky.

It’s tempting to fly right along the edge of forbidden airspace. However, if the FAA’s radar is off by a mile or two, three weeks later, after you’ve forgotten all about your flight, you’ll receive a letter from the FAA. You’re busted and you didn’t do anything wrong. How do you prove you’re right? Do you record all of your flights to prove your innocence?

Play it safe and avoid the problem. Fly two miles and 500 feet above/below the airspace you’re trying to avoid.

To avoid problems with all these cool tools, you should become competent in their use. Know the  app’s strengths and limitations and don’t assume anything.

If you follow the simple rules in this article, you should stay out of trouble. However, if for some reason you find yourself staring at a letter from the FAA,

2nd: Remember, you “know nothing about aviation law”. So, don’t try to fix this on your own. Aviation law is not a do it yourself hobby. Immediately consult with and possibly retain a good aviation attorney.